Welcome To My Family Photos Page This is me-Walter Westfall. I was born on my parent's farm near Fieldon, Illinois June 30, 1943. I am retired and I have never been married. I had just one older sister, Mildred (Westfall) Alben who passed away recently. Her husband Joseph Alben passed away in 2000. She lives in the Alton Illinois area.

My mother lived with me until 1994 when I had to place her in a nursing home because of ill health. She passed away in 1995. I live on 4 acres in a rural area of west central Illinois. This is my Mother-Lovie Katherine (Kraushaar) Westfall daughter of Charles and Caroline (Haushalter) Kraushaar. She was born Feb. 10, 1904 on her parent's farm near Fieldon, Illinois. She died of pneumonia in a nursing home in Pittsfield, Illinois Mar. 19, 1995 at the age of 91. She had very bad arthritis in later years, and was confined to a wheelchair in later years. During her final year in the nursing home she was almost totally bedfast.

She worked very hard on the farm all her life. She was a devout Christian and read the Bible and prayed every day and loved to go to church and sing the hymns and testify. She was a very warm and caring person just like her name, Lovie. I miss her very much. This is my parent's wedding picture. They were married Feb. 26, 1921 in Alton, Illinois. My mother's parents didn't want her to marry my father and so they eloped. My father borrowed a neighbor's horse and buggy and my mother packed her clothes in the night while her parents slept and met my father who was waiting nearby and they went by horse and buggy that night to Alton where they were married by a Justice of the Peace the next day. My father was 24 and my mother was 17 at the time.

My father, Walter Edward Westfall son of Jasper and Frances (McCaulley) Westfall (everyone called him by his middle name Ed) was born April 4, 1897. He died Mar. 17, 1977 (St. Patrick's Day). He had a stroke in May of 1976 and was partially paralized, and he also had diabetes and shortly after his stroke he had to have one of his legs amputated. We had to place him in a nursing home in Pittsfield, Illinois where he died in March 1977.

My father was a farmer most of his life in the fieldon. Illinois area. He bought his parent's farm after their death. He and my mother also ran a restaurant for a few years in Alton shortly after they were first married, and he also later worked at a tannery and at Shell Oil for a time before returning to the Fieldon area and farming. My father was also a World War One veteran.

My father loved farming and especially loved farming with horses and was good handler of the horses he farmed with until he later got a tractor and no longer farmed with the horses and mules anymore. He said he didn't enjoy farming as much after that. He was also a very friendly outgoing person who never seemed to meet a stranger, and would help anyone in need. 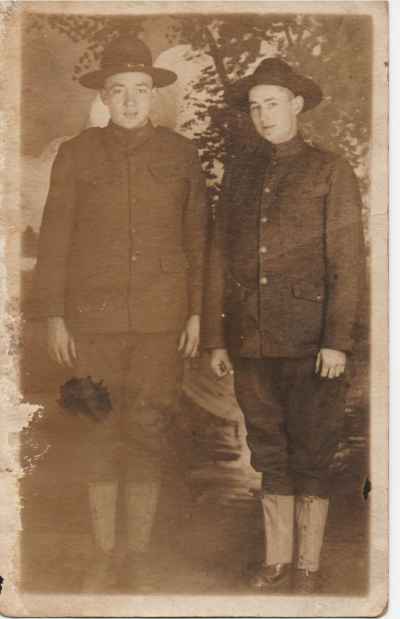 This is a World War I Army photo of my father Walter Edward "Ed" Westfall (1897-1977) on the left, and his friend Rupert R. "Doc" Rintoul on the right. My father was a U.S. Army Mess Sergeant during World War One. This is photo of my grandparents on my father's side, my Westfall grandparents. Actually it is a photo of an old portrait painted of them by a portrait artist. The portrait used to hang on our living room wall when I was a boy and fell and broke the glass, (Note the broken glass on the large frame). A few years ago I took it down from where I had it stored upstairs at my house and took this photo and sent copies to other family members.

My grandfather Westfall-Jasper Mifflin Westfall son of Emanuel and Hannah (Kelley) Westfall was born in West Virginia near Roanoke Feb. 25, 1857. He died at his farm near Fieldon Dec. 9, 1934. I was later born there in 1943 after my father bought the farm after his parent's death.

My grandmother Westfall-Frances (McCaulley) Westfall was born Nov. 16, 1869 in West Virginia and died Jan. 18, 1936 on her farm there near Fieldon just a little over a year after her husband's death. They were married in 1893 in West Virginia. They had 6 children-My father Walter Edward, Lonny, Jasper, Floyd, Laura, and Anna. They are all passed away now. My grandfather Westfall was a descendant of Jurian Westfall (Juriaen Van Westphalen) the first of our Westfall family to come to America in 1642 from Luyderdorp, Holland.

My grandfather had lived previously in the Coyville, Kansas area in 1870's and 80's when he was married to his first wife Mary Jane Shannon. He later divorced his first wife and moved back to his home state of West Virginia where he met and married in 1893 his second wife my grandmother Frances McCaulley. That same year they moved to Illinois and later in about 1899 bought the farm near Fieldon, Illinois. He traveled from West Virginia to Illinois by Oxen pulling the wagon.

My grandfather and his first wife Mary Shannon had 6 daughters-Marietta (who died shortly after birth), Eva, Nora, Grace, Stella, and Mamie. While farming in Kansas in the 1870's and 1880's he was said to have taken part in a cattle drive over the Chisholm Trial, and to have also known the famous outlaw Jesse James. My grandfather was a very hard worker, and my father said his father got up at 4 AM every morning and made all the children get up then also to do their chores and farm work. 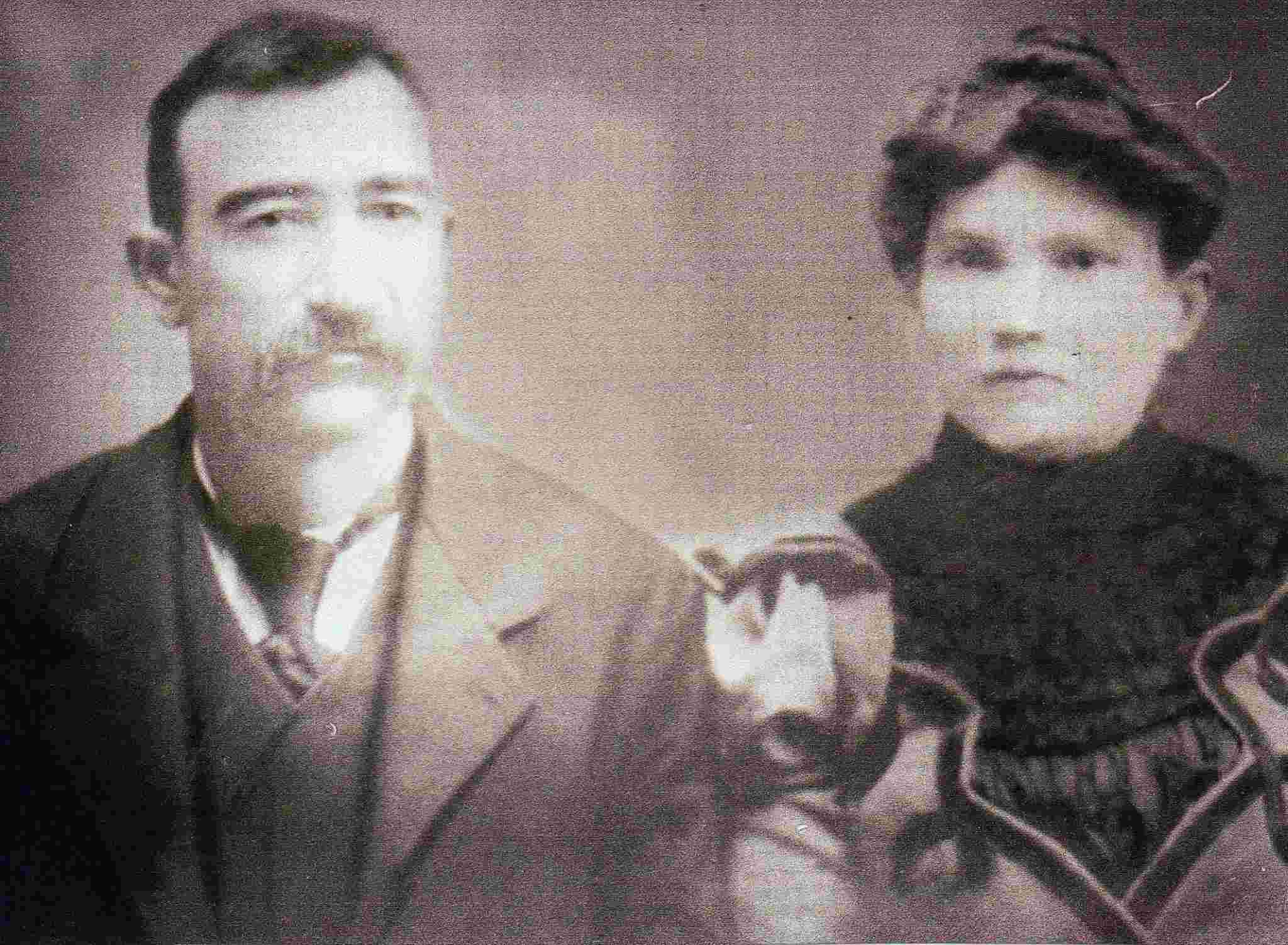 (Note: This is a better detailed version picture of my grandparents.) 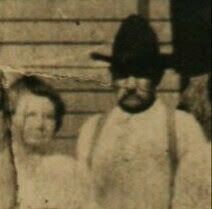 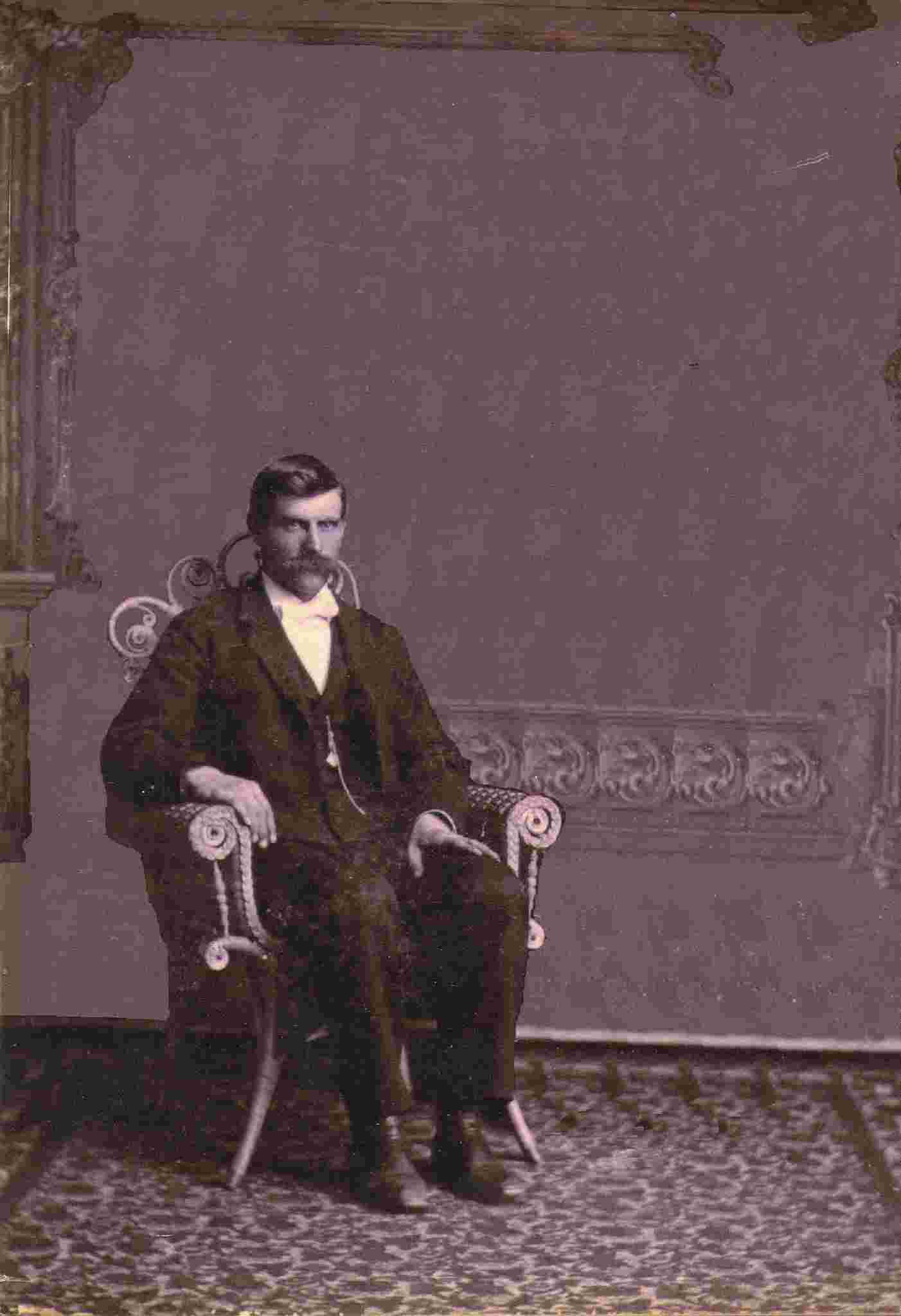 (Note: I recently received information that the above photo is of my uncle Charles Wesley Griffin who married my father's sister, my aunt, Anna (Westfall) Griffin (1904-1992). Photo was said to have been taken about 1900.) 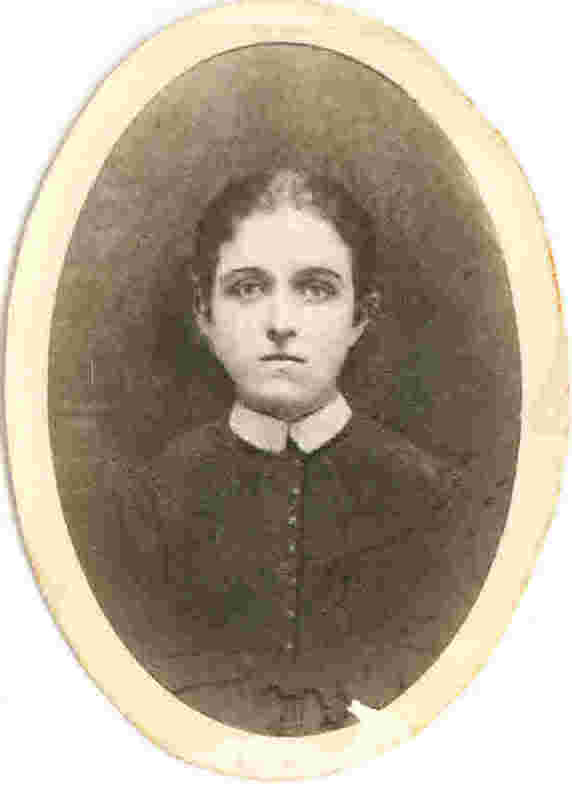 A picture of Elizabeth (Kelley) Helmick, a sister to my great grandmother Hannah (Kelley) Westfall, the wife of my great grandfather Emanuel Westfall Sr, and mother of my grandfather Jasper Mifflin Westfall. Hannah and her sister Elizabeth in the picture above were the daughters of William and Sarah (Bice) Kelley.

Her parents William W. Kelley and Sarah (Bice) Kelley were married 2-12-1827 in Harrison County, West Virginia. Hannah Kelley's mother Sarah (Bice) Kelley born in 1805. Hannah's mother Sarah Bice was born in Fayette, PA and was the daughter of William and Sophia (Shreve) Bice. Sarah's cousin was Thomas Bice the son of Morrel Bice who was a brother to Sarah's father William Bice. They all lived in Fayette Pa when Sarah was born in 1805.  They relocated to Harrison Co WV in 1810. William Bice was listed in 1810 census in Harrison Co. Hannah's father William W. Kelley was born in 1803 and probably died sometime in the 1850's, since there was no trace of him after 1850. My great grandmother Hannah Kelley's father William W. Kelley was the son of Nathan Kelley born 1750 in Salem, NJ and Elizabeth (Jarman) Kelley. Nathan Kelley was the son of John and Elizabeth (Cushlow) Kelley. Nathan's father John Kelley was born in 1743 in Ireland and came to America in the 1760's from Ireland on the ship Delaware, and he married Elizabeth Cushlow born 1750. John Kelley died in 1798. John Kelley who originally came from Ireland was my great grandmother Hannah (Kelley) Westfall's great grandfather.

Hannah's sister Elizabeth Kelley in the picture above was born in 1847. She married 9-21-1865 David Helmick born in 1826 from Lewis County, West Virginia, the son of John and Mary Ann (Hacker) Helmick. David S. Helmick died Feb. 28, 1903 in Lewis County, WV, and is buried in Jacksonville Cemetery near Walkersville, WV. Elizabeth (Kelly) Helmick died March 17, 1904 and was buried next to David on Mar. 26, 1904. Family members sometimes spelled their surname Kelley and at other times Kelly. This is the wedding photo of my grandparents on my mother's side-My Kraushaar grandparents. They were married 4-14-1898. He was a farmer and farmed in the Fieldon, Illinois area a few miles from where my grandfather Westfall farmed. My grandfather Kraushaar-Charles Kraushaar son of Frank and Julia (Albert) Kraushaar was born July 4, 1875 on a farm near Fieldon. He died Nov. 23, 1947 in Jerseyville, Illinois.

His wife, my grandmother Caroline (Haushalter) Kraushaar daughter of John George Haushalter and Margaret (Schiller) Haushalter was born July 14, 1881 on a farm near Fieldon, IL and died April 27, 1937 in Jerseyville. Both of my mother's parents were the children of German immigrants, and they still spoke some German. My mother said her father was a very hard worker, and often worked way into the night plowing with his horses in the fields with a lantern tied to their harness to see by. They had 4 children-My mother Lovie, Elizabeth, Freda, and Raymond. They are all passed away now. This is a picture of my mother's mother, my maternal grandmother, Caroline (Haushalter) Kraushaar, the daughter of John George Haushalter and Margaret (Schiller) Haushalter. She was born 7-14-1881 near Fieldon, IL, and died 4-27-1937 in Jerseyville, IL. She married Charles Kraushaar 4-14-1898. This is a picture of my mother's Aunt (My Great Aunt) Elizabeth Haushalter (we called her Aunt Lizzie). She was an older sister of my mother's mother (my grandmother) Caroline (Haushalter) Kraushaar. Aunt Lizzie was never married. She worked as a housekeeper for several wealthy families in St. Louis for many years. After her retirement she sometimes stayed with my parents and I when I was a little boy at our farm near Fieldon, IL. Mildred lived in the Alton Illinois area. She was married previous to her marriage to Joe to Russell Thompson, son of Logan and Viola (Bowers) Thompson, and had a son Russell born 8-22-1937. Russell and his wife Lois live in the Alton area, and they have 3 married daughters-Terri, Melanie, and Lesley. This is a photo of my parent's memorial tombstone located in the Grimes-Neely Cemetery 4 miles west of Jerseyville, Illinois on Illinois State Route 16. My Westfall grandparents and other relatives are buried there also. This is a photo of my house which is in west central Illinois in a rural area. I own 4 acres. I had the large wooden ramp built in order to get my mother's wheelchair in and out of the house. The large oak tree in front of the house is very old and it's huge limbs cover the house and provide nice shade in summer. In the fall it's leaves turn a beautiful bright red, and when they fall I have a yard full of leaves to rake :) I live in a wooded area in a little valley and a small stream flows nearby. I often see deer and other wildlife as I look out my window. My Sister Mildred, Me as a Baby, and My Mother A more recent photo of my sister Mildred taken at Christmas in 2000. A more recent photo of my sister Mildred with her family at Christmas in 2000.

Mildred is in the blue sweater in the back. Mildred's son Russell Thompson is standing just behind Mildred to her right holding the little baby Lily who is Mildred's great granddaughter born April 20, 2000 on Mildred's birthday. Next to Russell and Lily is Lily's mother Lesley (Thompson) Kolesa in the red sweater, Russell's youngest daughter. To Mildred's left is Russell's daughter Melanie (Thompson) Moore and Melanie's daughter Jenna. On the couch left to right is a girlfriend of Nicholas Harvey, Terri's son, to her left is Terri (Thompson) Harvey, Russell's oldest daughter, and Whitney, Terri's daughter, and Alexis the daughter of Lesley. In front is Russell's wife Lois, and to her right Lois's mother Pearl DeBoard. Return To My Poetry and Prose Homepage

Return To My Omega Sun Homepage

Return To My Genealogy Homepage